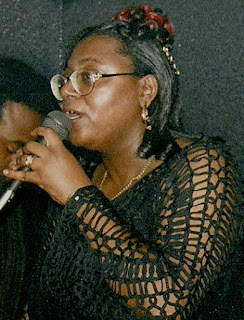 𝐏𝐂𝐑𝐋 𝐃𝐉, 𝐒𝐚𝐧𝐝𝐫𝐚 𝐁𝐞𝐞, played dancehall, reggae & ragga music, shown here at the Porsche Club in 1995. Now found on Tellstream Dem on-line radio. Part of the Female Connection that was formed in 1991 and is the musical collaboration of Birmingham based Radio and Club DJ’s Sandra B and Lady Destiny. Both Ladies are of Jamaican origin which is where their deep understanding and love for Reggae and Dancehall music is rooted.

Female Connection play a variety of styles which include Reggae, Dancehall, Revival, R&B as well as Hip-Hop and Soul music, whereby they are at their best when it comes to playing dancehall music. Their unique playing style continues to attract interest also in the US and Jamaica. David Rodigan said about them : “… in 25 years I have not seen or heard any other more professional Female DJ’s ... “

The Female Connection is a musical force to be reckoned with!
Posted by Mickey Nold at 10:54