Pilot speaks while off-air in 1989

With PCRL being off the air I'm sure that you"re thinking we're lazing around doing nothing well chance would be a fine thing.

While we are off the air there is still the office to run because our Gift Shop is still open for sale of our paraphernalia and also of course doubling up as an Information Centre.

With the application pending we are at this present moment forming a working party consisting of people who have the knowledge and background to present our application for a Broadcasting Licence in the strongest possible light. This particular committee has been meeting once, sometimes twice, per week in meetings lasting at least 4 hours duration and I'll tell you, you feel pretty tired after one of these meetings.

Being off the Air also creates another problem, how do you keep the presenters interested? What we try to do is to hold regular staff meetings so as everyone knows what is going on but still it is a very difficult task.

Some of our Presenters are attending the Community Radio Training Course (CRT) to enhance their Broadcasting skills, they are working very hard to attain their certificates in Broadcasting Proficiency I'm sure that a lot of their training will reflect in forthcoming programmes.

Before I close it must not be forgotten the hard work that has gone in to putting this magazine together, if I went into that it would take another page. So as you can see there is a lot going on behind the scene!         By Pilot


Inside PCRL
Many people ask me how is PCRL run? How do we maintain discipline within the ranks? Are there rules to abide by? Who decides who does what?

I could take quite a long time to answer these questions but I'll try and keep it short. First of all when PCRL first started it was obviously run by the Founder Member, (Music Cecil Morris Master) I have to say it was very difficult 4 years ago but everyone at that time as enthusiastic about the project and had the same aim of becoming legal.

Gradually, the original team started to break up and new people joined the organisation, this presented problems. One of the major ones was the fact that some of the people who joined did not know the unwritten rules of the organisation. 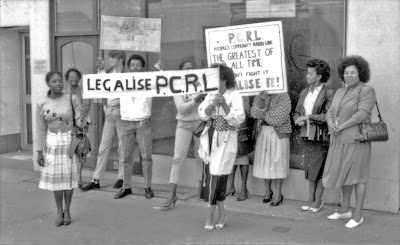 We all got together as a group and came up with a document which is called 'The Code of Conduct' which is still in operation today it also forms the basis of discipline within the ranks.

PCRL has been through various crisis where the very foundations has been stretched to the limit, but I am glad to say that we have survived them all mind you, can anybody tell me of an organisation which exists on volunteers that hasn't had its turmoils? Bet you can't.

Where rules are concerned, which do not appear in The Code of Conduct, the main one is Presenters must not! say anything on Air to upset our Listeners or anything that could be detrimental to any particular Group or Groups.

For the past 2 years PCRL has been run by what is called a Council of Management, this Group was formed to make policy, steer the organisation in (hopefully) the right direction, keep up morale and most important to inform Presenters on whats happening.

Meetings are held once a month and let me say these can be very fiery sometimes with so many different opinions coming into the arena but at the end of the day common sense must prevail, I can safely say that All Presenters are well informed.


One great thing about meetings is that they create some really funny moments and they are also a morale booster, I might tell you about some of those funny moments at a later date anyway you know a little bit more about inside PCRL. - Pilot