Pirates who keep one step ahead


'They are communication in a way no other station can, filling a gap' 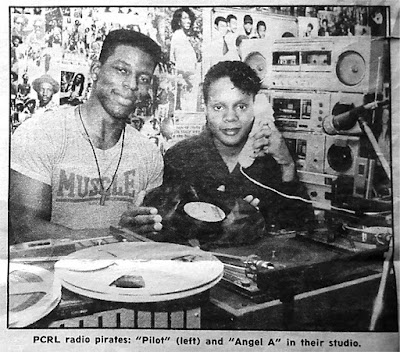 Pirates who keep one step ahead

"Carlton C" is hunting through letters of support to find the telephone. He picks it up in the Dudley Road, Winson Green, office, listens a while, then speaks.
"Don't believe the rumours," he says. "We'll be back soon."
The room above an empty shop is HQ for People's Community Radio Line, the pirate radio station silenced from its spot on 103.5 FM since last week when they removed their transmitter from the tower of Winson Green church. The Rev Richard Bashford, vicar of Winson Green, had been its willing host.
The move was nothing new to these die hard pirates of the airwaves.
Their mastermind — known as Music Master over the air — points out that they have had to move their radio equipment about 200 times since 1981, been raided 67 times in the last 19 months by the Department of Trade and Industry's officials.

Valuable service
He's black, gentle, helpful. And a bit hurt that what he and his 21 presenters see as a valuable service to the community is breaking the law.
PCRL broadcasts — for as long as it can keep a leap ahead of the Department of Trade and Industry —  for 24 hours a day, seven days a week.
Its programmes are n combination of Afro-Caribbean music, community notices, advice, home and health hints, news from
It claims a listenership of more than 250.000 in Birmingham and surrounding areas, and has a following in Leicestershire.
Its presenters are volunteers. Those that have regular employment say they pay a little in support of the station. "And look at those," says Music Master, pointing at some beautiful wooden clocks, in the shape of the Caribbean islands. "We're helping a small business to get known by broadcasting advertisements for them. When they'll start to pay us. "Blacks get only five hours on Radio WM per week, BRMB broadcasts two-and-a-half hours per week for blacks and Asians. And that's mainly music.  It's not sufficient for the people who like PCRL, nor is it so informative and varied. "Our people are often out of work, which means they don't have money to buy the records that would keep them abreast of our ethnic music, a great link with our roots.

Great support
"We are keeping them in touch this way and telling them of events within our own community.
"We have used an Asian presenter, receive great support from Asians. We get letters from hundreds of white people who enjoy our music.
"We also broadcast religious programmes. So what's so bad about us? why should be hounded like this? I see us more as radio social workers than law-breaker."
This view is echoed by the Rev Richard Bashford, PCRL's transmitter host until the diocese pointed out could not condone law-breaking.
"This station is providing a voice for a section of the community who wouldn't otherwise be heard," says Mr Bashford.
Some nights, requests are played for John the Godfather, alias the Rev John Geyer, a United Reform Church minister from Weoley Hill, whose church council supports PCRL.
"I think it is vital that the station be granted a licence," says Mr Geyer, "even though I know the legal difficulties.
"This is the voice of the inner-city now. It could be used for enormous good in times of trouble.
"They are communication in a way nor other station can, filling a large gap, I've found them sincere people of integrity, motivated by genuine desire to help their community and all those who listen to them.
"I know they have support from sections of the West Midlands Police.
"I can only hope that public opinion will encourage the government to issue a licence as a special case -- and this is what I'm campaigning for."
Music Master points out that they have equipment confiscated time and time again by Department of Trade and Industry "boarders".
"But each time the community rally round, to help replace it" he says.

Plans Shelved
PCRL claim that BRMB, dismayed by their success, is behind the raids.
"That's simply untrue," says a spokesman for the Trade and Industry Department in London.
"Local stations like BRMB in Birmingham, and Capitol in London, are either independents or part of the BBC. They are licenced by the department.
"Any station broadcasting without that licence is in breach of the Wireless and Telegraphy Acts, 1959 and 1967.
"There is nothing that can be done to help PCRL until community radio licences are issued. No matter how much support they have in Birmingham, they are just like any other pirate station - but more persistent.
"I'm afraid they must wait for community radio licences before they can operate legally.
"In the meantime, it must be remembered they are using airwaves which might be needed for important emergency services or military operations."
Back in Dudley Road, Music Master and Carlton C are unbowed.
"The said the same about CB radios before they were legalised," they say. "But we have a service to perform and perform it we will."
At BRMB, managing director Mr Ian Rufus said PCRL were a "minor irritation."
"But we'd like them off the air." he said. "We have to pay something in the region of £300,000 a year rental for our transmitters which is supposed to guarantee our right to be the city's only commercial station.

Last Word
"They interfere with places on the broadcasting system allocated to legal stations and they pay no royalties to companies for using their discs."
Last word came from Dudley Road.
"We are just asking for the chance. Give us the licence and we will pay whatever's needed from us."
Meanwhile, a lot of fingers are swinging dials for the first sounds from the relocated pirates on 103.5 FM.
Posted by Mickey Nold at 11:31

Email ThisBlogThis!Share to TwitterShare to FacebookShare to Pinterest
Labels: Press