William Randle was a regular guest on Mickey Nold's 'Basement Soul' show, Sunday afternoons. He regularly took a tape recorder with him to the United States and made some great interviews, later to be made into 'Special Shows' that ran from 1992-2000. A list of some of the surviving shows is in a marquee below.  Bill now has his own radio show on  Bridge FM  (now Black Country Radio) in Stourbridge:  www.thescienceofsoul.com  some of his old PCRL shows can be found on his own Blog site along with Podcasts of his new Soul shows. Find him on Facebook too Sadly Bill passed away after a short illness in 2020, he'll be missed by by all. 04-04-20 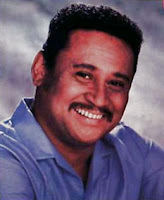 Steve Mancha Special (1945-2011)
n 2011 we lost another great voice of soul music in Steve aka Clyde Wilson. In this vintage PCRL recording Bill pays tribute to this wonderful voice of Detroit. Steve also sang with 100 Proof Aged In Soul & The 8th. Day.